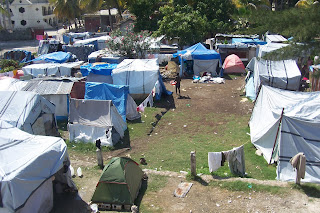 LEOGANE WAS THE EPICENTER

This picture is of one of the many camps in the town of Leogane taken from the rooftop of the adjacent structure where I am based as a volunteer with Hands On Disaster Response.
My estimate is that 70% of the structures in Leogane are either pancaked onto the ground or tilting, or unstable enough to be trully uninhabitable.  So most of the people live in makeshift coverings such as you see in this photo. Some in camps such as this(most camps much bigger than this one), and some in varied make-shift shelters on one half of the streets.
This past week the rains started, mostly at night, and do I mean serious rain!  Buckets, dogs and cats all coming down for hours, flooding everything in sight.
You can just picture in your mind the status of the mattresses and blankets and carboard that these camp people are laying on the ground to sleep on.
And, what do you do if you are old, very young, or, as there are many, missing a leg, and you need to go relieve yourself at night?  I will leave it to your imagination and what you have heard in the news.  Let's just say that rubber boots are a safe precaution.
One of the wisdoms of Hands On Disaster Response: (from now on we will call it: "HODR"), is that they are agile and get to disaster areas quickly and secure a base where volunteers can feel safe, dry and sanitary.  We are housed in a large compound with a partially enclosed  concrete structure.  Toilets that are flushed by bucket water and shower stalls also that also use hand powered buckets.  The water is pumped up from a well to two large plastic tanks on the second level.  We sleep in a mixture of tents and bunks, I chose a  bunk under the concrete roof that withstood the quake. This has the benefit of not getting wet during the rains, but requires alertness and swift exiting when aftershocks occur, of which there have been two during my 5 days here.  I swear, the cement floor rolled like a wave under my legs.

NGOS AND BUEROCRACY:
The main qualities of HODR that I am seeing, is that they are very short on buerocracy and therefore quite effective.  In fact, what many of us 75 0r so volunteers end up doing is helping other NGOs function better.  We are fabricating temporary schools for UNICEF, have put up some 500 temporary fabric structures for people to live in, built fences, temporary structures and shelves and organized all the supplies at the local hospital.  Helped the Canadian Red Cross clear rubble and conduct assessments.  Helped CHF set up production lines for metal shed structures they are building in a large tent behind our base building.
This is all done in an enthusiastic don't waste your time thanking me attitude.
Yesterday I refined the design and materials list for temporary wood shelters of which  this week we will build 100 of for another NGO.  This afternoon a group of us is helping Shelter Box with distribution of tents and supplies to the inhabitants of the tent camp you see in the photo above.
This coming week I hope to start planning, and hopefully building, the parts for some 100 one story wood frame "transitional" school structures for local school sites.  Transitional means to last a couple of years while temporary means to make it through the rainy months ahead.
I was just told that on the 20th of April they may be sending me to a separate small island to instruct brick-laying

SOME GREAT INDEPENDENT FELLOWS
There are many impressive independent persons doing some really fantastic work here that is filling some huge holes of need.  Three builders from New York State came down with 300 tents  theey purchased for  about $300 each.  These were gone in minutes.  So they came up with a concept of using PVC pipe and waterproof white shrink-wrap to build bigger cheaper structures. HORD is helping them put together these quanset hut type tents far larger than what the families have been living in for the last few months, all for the cost of $75 each.  They are calling themselves SHELTER QUEST, they are the ones that UNICEF just approached to build 80 to 100 larger structures to work as temporary schools.  A crew of 6 from HODR started yesterday and prepared many of the parts for some 25 of these school structures.

SLEDGE HAMMERS,  PICKS, SHOVELS AND WHEELBARROWS
It turns out that before you can build a new transitional structure you need to get rid of the concrete and cinder block rubble that is pancaked on top of the building pads.  I hesitate to call their pad a slab because their foundation is mostly a very thin layer of cement over a couple of feet high mix of large river stones and sand with some cement mixed in.
The HODR teams are out there in the hot sun sledging the concrete to pieces, shoveling it onto wheelbarrows hauling it off the slab onto the many piles of rubble building up everywhere.  The impressive sight is the many college age girls who are using these above listed tools with energy and vigor.  Many times with local men watching on the sidelines, The fact of able men only watching will be a topic for a future posting on this blog.

STRUCTURALLY WHAT IS WRONG WITH LOCAL PAST BUILDING TECHNIQUES?
Simple:
1. Too thin a diameter of re-bar:  It seems to be all 3/8" vs. the 1/2" or 5/8" we are used to in the US.
2.  Not near enough rebar.  Basically its only used in vertical colums spaced some 12 feet apart.
3.  The space between these vertical columns is filled with cinder blocks which are weak in consistency.
4.  The sand used is pourous and needs a far higher concentration of cement that what is used.
5.  Cement is mixed with sand in puddles on the ground which does not make for consistency in the mix.
6.  The all too common practice of stacking cement floors and roofs which are heavy and again do not contain enough re-bar or cement.
The sad thing is that the little new construction work I see, appears to be going up with the same failed  techniques and design.

The bandwidth for our satellite connection here is very slow, in fact it took exactly 12.5 minutes for this one photo above to load onto the blog, which does not please the other volunteers trying to get on line. So next month, once back in a "developed" country, I will upload many more photos which I assure you will give you a deeper understanding of the destruction and the people here.
Future Postings Soon!  Sign up on this blog site as a "follower" so I know who I am writing to.
Posted by richard wodehouse at 4:40 PM